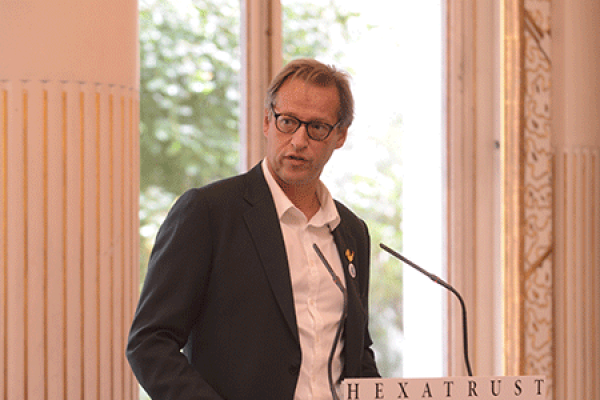 The current health crisis has put our societies and their economic fabric to the test by brutally confronting them with their capacity for social, economic, health, logistical and digital resilience. It has shown the risks of an uncontrolled globalisation that deprives us of any capacity for initiative due to an inability to produce large amounts of medicine and protective equipment (masks, gowns, etc.).

At the same time, European companies and organisations, including public hospitals, fell victim to hackers and many different types of attacks. Here again, the question of our dependence on digital tools arises: how can we go about creating a digital, cybersecure and cyber-resilient industry in Europe? Jean-Noël de Galzain, CEO of the WALLIX Group and CEO of Hexatrust, a group of innovative companies operating in the field of cloud computing and cybersecurity, and Yves Reding, CEO of EBRC, member of Hexatrust since June 2019, provide components of an answer through a joint interview.

Yves Reding: The COVID-19 pandemic showed that the minimum resources required to respond to a major health crisis are not available in Europe, in particular as regards the production of masks and respirators. This situation should worry us, because what is happening in the physical world today could, in the same way, happen tomorrow in the digital world. What will happen in the European Union if an unknown and virulent computer virus spreads across the whole planet? At a time when the major players in the digital world are American or Chinese, the European digital industry is non-existent on a global scale: it is urgent to wake up!

Jean-Noël de Galzain: In Europe, the political and economic world is not sufficiently aware of the importance of digital risks. To give some figures, Israel spends 22% of its IT budget in cybersecurity, the United States between 13 and 17% and Europe around 8 to 10%. The majority of the European Union countries are lagging far behind as regards taking account of cybersecurity and cyber-resilience. And yet, this is the key to create a sustainable and trusted digital ecosystem for us and our citizens. The health crisis that has paralysed all European economies for several weeks is just a forerunner of what may lie ahead, should we fail to apply a digital precautionary principle. Some people are already talking about the great computer virus that threatens to affect not only our societies, but also all our vital systems such as health, telecommunications, water, electricity, heating and transport. Although the health disaster is well and truly established, it is still possible to anticipate this IT risk! Cybersecurity professionals working together with digital professionals can still make a difference.

After this health crisis, it is crucial that Europe implements a Digital Marshall Plan that involves all the players in the countries of the Union. In my opinion, it is not normal for a European government to be tempted to entrust the personal health data of its citizens to a company outside the Union, without first seeking to rely on local stakeholders, in the name of security and national independence. I think in particular of the discussions initiated in France between Les Hôpitaux de Paris (Paris hospitals) and the American giant Palantir, co-financed at the time of its launch by the CIA, in the aim of developing a digital tool for monitoring the Covid-19 epidemic1 . Our association, Hexatrust, has the specific target of ensuring that such a scenario does not occur again.

A challenge for industry, culture and civilisation

Yves Reding: The fight led by Hexatrust and other similar associations in other European countries is a challenge not only faced by industry, but also by civilisation as a whole. If we consider Palantir, the American Big Data giant, the problem also lies in the access to strategic and sovereign European data. The Cloud Act, an acronym for "Clarifying Lawful Overseas Use of Data Act", introduced by the Trump administration in May 2018, obliges all companies under US jurisdiction, including the American Cloud giants, to provide the American authorities, in the context of an investigation, with access to the sensitive data of European companies or citizens that is in their possession, whether it is stored on servers in the US, Europe or another country. Across the Atlantic, personal data is traditionally perceived as a commodity. The approach is different in Europe, because of our history, where online privacy and data protection are part of our cultural DNA.

The European Union is one of the largest trading areas in the world with more than 550 million consumers; it has its own values despite its diversity, but it sorely lacks a digital industry worthy of the name. It is high time we capitalised massively on the digital know-how of our countries to prevent the best engineers and computer scientists from our schools from emigrating to Silicon Valley or Shanghai in the future.

Jean-Noël de Galzain: The post-Coronavirus period will perhaps be a unique opportunity to finally build a genuine digital industry. This health crisis has revealed the importance of digital technology in our lives and our economies, but also the extent of our dependence. The mastery and formidable deployment of that technology has demonstrated that European know-how exists and is just waiting to be developed. The main players in the sector, such as EBRC and the other members of our group, have made every effort throughout this lockdown period to ensure that companies can continue to operate in this unprecedented configuration. Tomorrow, these same players will be ready to participate in the necessary reconstruction effort.

Yves Reding: The establishment of the new European Commission with well-known personalities, including Thierry Breton2 as the Commissioner in charge, among others, of industrial and digital policy, is a good omen for us. We can only hope that it will be possible to create a lasting link, via a sufficiently large skills offering, that will enable a "made in the EU" IT industry to emerge as the cornerstone of our European digital model.

1In the end, these talks did not succeed and Les Hôpitaux de Paris rejected Palantir's proposal.

2Thierry Breton is a business leader and politician who has spent most of his career working in the field of IT and technology.