Which innovation(s) to meet the socio-economic challenges facing our society? 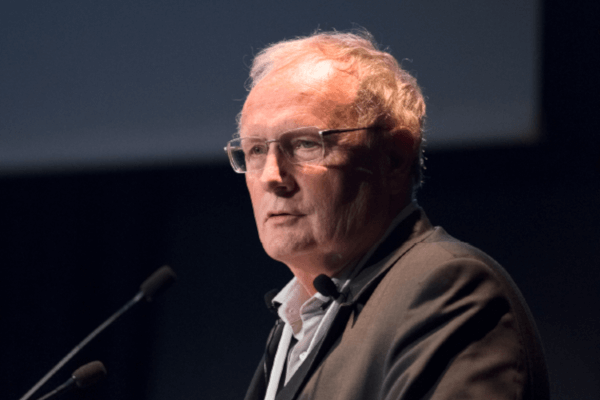 On 28 March 2019, Marc Giget (see picture), President of the Club de Paris des Directeurs de l’Innovation (Paris Club of Heads of Innovation), travelled to Esch-Belval to give a lecture at the first edition of the WOOP (World of Opportunities) in Luxembourg at the initiative of InTech and sponsored by EBRC. Before his speech to a packed audience, he answered questions from Jean-François Hugon, Head of Marketing at EBRC. Here is a look at the discussion focused on the major current socio-economic challenges including the aims of innovation and the impact of digitisation.

The Club de Paris des Directeurs de l'Innovation, which brings together around one hundred global groups including many leaders in their respective fields, recently published the outcomes of its study entitled "New innovation strategies 2018-2020". As its name suggests, it is based on an analysis of those international groups’ strategies and their perception of the challenges with which humanity must now contend.

JFH: Based on this recent study, what major socio-economic trends will our societies face? Could future crises emerge from future changes and the imbalances they could create?

MG: Above all, we are witnessing a significant increase, even an explosion, in the world’s population. It is lower than expected in China and India, but Africa continues its strong development, leading to a redistribution of the world’s population. Europe, for its part, will soon only account for 8% of the world’s population. Furthermore, this increase is accompanied by a concentration in cities, where 65% of the world's population can be found which further account for 90% of the GNP. In addition to these demographic changes and an ageing population, we should also mention global warming, the ecological transition, and the fact that analyses show that purchasing power is not increasing, and has not increased for several years. This downward trend toward stagnation is a major challenge for companies, which tend to turn to the high-end, premium segment when it would be more appropriate to offer cheaper products and services.

With a significant economic risk and the announced return of a major crisis, with a gigantic debt, interest-free loans, significant speculation and the emergence of cryptocurrencies... I wonder whether we are now better equipped to deal with a potential economic crisis. Then there are also the open conflicts, in Europe and beyond, and the uncertainties associated with Brexit and the idea that other countries could emulate the United Kingdom, with the fear of a three-tier Europe, but also the rise of protectionism, particularly in the United States, which inevitably reduces trade while driving up the prices of certain goods.

JFH: What findings have you made regarding the evolution of cyber-threats?

MG:  This increasingly sophisticated cyber-threat will continue to grow in the next 3 to 4 years, with a serious advantage given to attackers in the current context. The Paris Club and its members are working towards understanding this changing world, with the aim of exchanging best practices in order to deal with these risky situations. The fact that the situation is deteriorating should not be ignored. Awareness is needed. We will then have to regroup to put the pieces back together because, as History has shown before, the solution will not fall into our laps!

JFH: How do you interpret this digital transformation of our environment? Are we facing a major disruption?

MG: I do not believe that it is a disruption, but rather a digital transition. I would also like to make a distinction between "megatrend" and "transition": in the first case, we observe the world and see it change. In the second case, we decide to act and manage that change. Therefore, it is more appropriate to speak of a digital transition rather than a disruption. We are creating a virtual world, but it is not a Copernican revolution like the invention of the telephone, the printing press or the advent of aviation. It is also necessary to clarify the term “disruption” which is too often overused and misused both in French and English. In French, it means a “cut” or “break”, while in English it refers to an “ordinary destabilisation”. Technological developments do not create a social disruption. People continue to use cameras, whether they are analogue or digital, Amazon performs mass distribution; there are many and telling examples. We are currently witnessing a rationalisation of existing systems, although it is not profoundly changing our civilisation. We are therefore in a period of sustained stagnation. I believe that the digital transition which we speak of today is simply a technological illusion!

JFH: Marketing feeds on buzzwords, of which artificial intelligence is one. Do you believe that it is a promising technology? If so, what might it achieve?

MG: AI? A myth, pure and simple! It is in no way comparable to human intelligence, emotion and empathy. This wave of digitisation would bring few innovations and would only barely impact productivity, which is a far cry from a supposed Renaissance: digital becomes a simple and commonplace convenience.

JFH: With regard to innovation, you often make reference to the Renaissance, a period in history that saw the development of many innovative methods and techniques, the appearance of patents, the birth of "capital ventures", the invention of design and R&D. Why is the Renaissance so representative of innovation? How do you consider it different to our times?

MG: The Renaissance was a true humanist revolution. It is during that time that the four stated objectives of innovation were described: to improve the human condition, to harmonise relations between people, to create the ideal city and finally to improve our relationship with nature. These principles have remained unchanged and are still the basis for innovation today. Technology is changing, of course, but philosophy is not. Let us therefore return to these values that unite and that are based on this "foundation of truth". For example, scientific innovation, while often discreet, advances and accumulates knowledge. It results in the development of new technologies, which do not create a disruption, nor a break, but transform old technologies. As American economist Joseph Schumpeter observed during his years of research, destruction often occurs before creation, creating social movements and causing people to fear a lack of information. Today, this destruction occurs faster and is much more violent, while creation takes longer than initially expected, creating a significant delay. I therefore invite leaders and entrepreneurs to train their employees and share their visions while organising the transition from one state to another. They have a key role to play with regard to preparing for the future. In France, traditional TV channels pay their taxes, while streaming platforms such as Netflix pay nothing. In a way, they use technology to bypass traditional methods. Leaders can never be blinded and must anticipate changes, as it can be difficult to change the law, which can lead to friction.

JFH: Have we not forgotten innovation’s role in improving the human condition in our societies? What recommendations could you give to entrepreneurs, project leaders or decision-makers in order to develop innovation?

MG: CEOs and business leaders do not pay enough attention to the digital transition, and as a result 80% of projects do not succeed. What is the reason for these failures? Digital is pushed onto employees while the latter should in fact be the drivers of the transition based on their desires and expectations. Tech, tech and more tech. The human dimension is often overlooked. Digital technology should be at the service of employees. We have gone so far as to ask people to robotise themselves. Fortunately, today, humans are naturally coming back to the fore in these discussions, but the transition is violent, because we walked down the wrong path for too long. As was the case during the Renaissance, let us prioritise human thought and manage this transition towards the emergence of a society of shared progress!