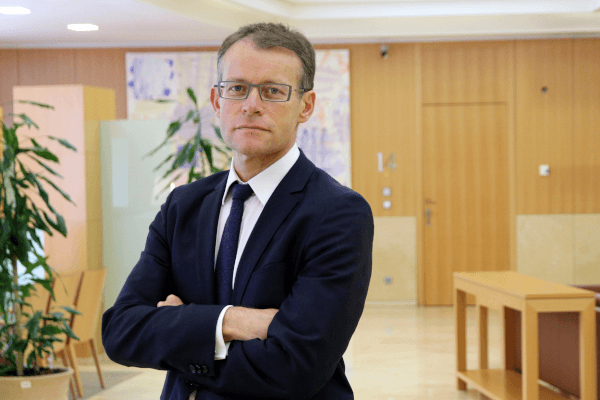 Over the past years, KBL European Private Bankers reached a fundamental milestone in ensuring its digital performance by completing several key projects. The private bank redefined its professional platform by deploying the BPO solution of the Lombard Odier group and by implementing a new technological infrastructure in two new Data Centres, in partnership with EBRC. A perfect successful alignment of milestones for establishing a digital base for tomorrow.

Over the past years, KBL European Private Bankers reached a fundamental milestone in ensuring its digital performance by completing several key projects. The private bank redefined its professional platform by deploying the BPO solution of the Lombard Odier group and by implementing a new technological infrastructure in two new Data Centres, in partnership with EBRC. A perfect successful alignment of milestones for establishing a digital base for tomorrow.

KBL European Private Bankers’ (KBL epb) strategy focuses on positioning the group as a European network of banks, trusted partner for private clients. In the context of the internationalisation of the management and transmission of private assets, wealth management banks face many challenges and have many opportunities to seize. Operational performance plays a key role in achieving the ambitions supported by increasing proximity with the client. As a result, digital platforms have become vital for creating a relationship of trust between private bankers and their clients.

The KBL epb group cemented this ambition in 2017 by achieving several milestones. The bank accelerated its geographical positioning by developing its subsidiaries’ business in Luxembourg and elsewhere in Europe. Early 2017, the KBL epb family was expanded by the inclusion of Insinger de Beaufort, the Dutch store, which was joined in the autumn by its fellow Dutch company Theodoor Gilissen Bankiers under the new entity InsingerGilissen. Later, a preliminary agreement, which was submitted to the supervisory authorities for approval, was entered into with the Société Générale de Banque du Liban for the sale of KBL Richelieu (France) and KBL Monaco Private Bankers.

In a shifting context for business, the financial industry continues to weather regulatory, technological and generational changes. The KBL epb group anticipated some of those important milestones, backed by a new IT platform, G2, consumed as a BPO service from TBI Europe, a subsidiary of the Swiss private banker Lombard Odier. A first for such a large group in Luxembourg!

In January 2016, the Banque Puilaetco Dewaay Luxembourg was the group’s first subsidiary to migrate its activities to the new financial services platform. It was joined by KBL Richelieu in the same year and subsequently by KBL European Private Bankers in Luxembourg last July. The new system’s deployment will continue with the group’s other subsidiaries. Anchors aweigh!
Starboard helm!

In parallel, the bank took a strategic decision to also obtain a state-of-the-art technological platform in a perfect alignment of milestones and schedules. “We entirely redesigned the way in which we organise our services hub activity for our subsidiaries”, explained Éric Mansuy, Group Head of IT & Operations at KBL epb. Today, IT and business operations are the solid foundations of the bank’s future.
The Data Centre, at the heart of the system for continuous improvement

In 2014, the bank had to face facts: significant medium-term investments had to be made in its own Data Centre infrastructures in order to maintain high levels of reliability and security. Supported by a situation audit conducted by APL’s expert services, KBL epb consults the market in order to consolidate its Data Centre activity with a market leader, while enjoying a significant optimisation of the allocated space. At the end of the RFP process, sensitive information management expert EBRC – European Business Reliance Centre -, specialised in the exploitation and operation of certified Tier IV Data Centres, was selected to assist the bank in the implementation of the new Data Centre infrastructure. The roadmap is clear. According to Yves Reding, CEO of EBRC: “Transforming a bank’s digital infrastructure is always a particularly delicate and complex operation. Banking relies entirely on IT, and service cannot be interrupted at any time. We are very pleased to have been able to contribute, with the support of our partners, to the success of this IT transformation project enabling our client KBL to gain a new impetus in its core business.”

More than simply relocating Data Centres, the bank also wishes to make a technological leap. The analyses conducted by the KBL epb teams, EBRC and their partners show that the rejuvenation of servers, networks and storage systems can take place directly in the new Data Centres. “New in new”, smiled Éric Mansuy. The aim is therefore to implement the new equipment in the new rooms dedicated to KBL epb. ”At one time, four Data Centres were interconnected: KBL epb’s two historic Data Centres and EBRC’s two new Tier IV sites”, said Eric Mansuy. This solution provided much greater latitude in the project aimed at relocating the infrastructures. Associated costs were controlled because they were accounted for in the project plan and strengthened by the flexibility of the EBRC model.
“Together, we looked at several alternatives for the Tech-Refresh, said Éric Mansuy. We ensured that there was a balance between our ambition, the benefits inherent to introducing new technologies and the desire to control the risks linked to the project. We therefore adopted a prudent approach combining a physical move with the partial re-engineering of the technological platform. Today, the facts have validated our approach: there are richer technological opportunities, in particular with the emergence of cloud services.”

Many challenges appeared in the context of the KBL epb computer centre migration project. In its target design, the bank also disengaged its mainframe. Without any room for Legacy in the new Data Centre, the colossal archiving robot also had to be disengaged. Additional challenges which, when combined, can create conflicts of interest between individual strategic projects.

Firstly, the infallible support of the Executive Committee and the project’s transparency provided the necessary rationale for combining the projects. Secondly, the climate of trust that the teams built and demonstrated at all levels thanks to their professionalism was crucial to the project’s successful completion. “The project benefitted from everyone’s high level of motivation. Consistent communication and controlled execution forged it. Pitfalls were always overcome using a results-based approach and I am certain that the chemistry between the teams made this possible”, said Éric Mansuy. The bank’s teams are proud of having successfully completed such a large project which is a once-in-a-lifetime career opportunity.

Thoroughness is a desirable fault in this type of complex project. The teams benefitted from the necessary time upstream to cope with each unforeseen event. “Our partners had real expertise and we never felt as though we were abandoned with an open issue. Each point was raised and detailed with care”, said Éric Mansuy.

One of the qualities of the action of EBRC and its partner Anidris which provided its support in the work conducted with KBL epb, was the consistency and rigour essential to the project. “If we had to do it again, we would choose the same partners, without a doubt”, said the Group Head of IT & Operations at KBL epb. The demonstrated strength lay in the guideline followed and never deviated from over time. Even after the six moving operation necessary for relocating the bank’s two Data Centres, the energy deployed remained the same and never faltered.

“The most remarkable thing about this project is that we kept to the strategy developed during our reflection in 2014. We did not deviate from the initial ambition by one iota. Our requirements were known: the BPO project could not in any way be affected by the technological project”, said Éric Mansuy.
After the project’s completion, KBL epb has more than just a new Data Centre infrastructure. The group is better prepared to take on the opportunities provided by digital and to promote the private bank’s image at the heart of Europe.

KBL epb, know-how made in Luxembourg

Next year, the bank will be celebrating 70 years of presence in the Grand Duchy. Rewarded best private bank in Luxembourg for the second year running at the PWM/The Banker Global Private Banking Awards 2017, KBL epb is one of the best private banking groups in Europe that received a Private Banker International Global Wealth Award. With the support of its reference shareholder Precision Capital, KBL epb is one of the leading private banks in Europe.
Brown Shipley (UK), Merck Finck (DE), KBL España (ES), Puilaetco Dewaay Luxembourg (LU), Puilaetco Dewaay Belgium (LU), InsingerGilissen (NL) and KBL European Private Bankers (LU) are subsidiaries of the Luxembourg-based KBL European Private Bankers group. KBL Monaco and KBL Richelieu should join the SGBL group in 2018.
KBL epb Group CEO Peter Vandekerckhove acknowledges this: “During this period of technological change, new societal trends and continuous consolidation, KBL epb is at the heart of a deep and positive organisational transformation”. He went on to confirm that: “Ensuring technological appropriateness by prioritising investments in areas that are important for the clients in order to provide them with a fluid and hybrid experience, while also integrating digital into internal activities”, is one of the five pillars of long-term growth. KBL epb is now prepared for the future.

EBRC, the partner of your IT transformation

Since the year 2000, EBRC offers its clients 100% availability in its certified Tier IV Facility & Design Data Centres. Awarded by the Uptime Institute, this certification defines the optimal level of security for IT infrastructures and guarantees a 99.995% rate of availability, i.e. less than 26 combined minutes of downtime per year.